Catherine Spencer has been running her agency for speakers and mentors since 2014, and when she offered me the chance to tweak her branding and build a new website – I grabbed it with both hands!

I’ve always been a fan of Spence and the Agency and was never shy about offering ‘help’ if she needed it. I was given complete free rein on layout and design and thankfully, we were both happy with the first draft. My Graphics magician Anthony then gave the logo the tiniest of tweaks, but his introduction of coral pink into the palette transformed the entire website.

As usual we started with a WordPress build and Spence’s only real direction was that she liked the side bar navigation that I’d shown in a couple of examples. I initially took the palette of oranges from the existing website, but was never completely happy with it. There was a lot of content to add with 20 speakers, their bios and their profile pictures … so I kicked off with that.

Anthony Costa, my graphics guy – had been busy at the start of the project on something else and so he came in as I was finishing off the content. I had already used the existing branding and palette but explained to him that 1) I needed a re-draw of the logo so we had it in vector format and 2) If he tweaked the palette, it wouldn’t be the end of the world…

It’s hard to believe that all he did was switch out one of the colours for the coral pink, as it transformed the look and feel of the palette. I loved it. So did Spence. 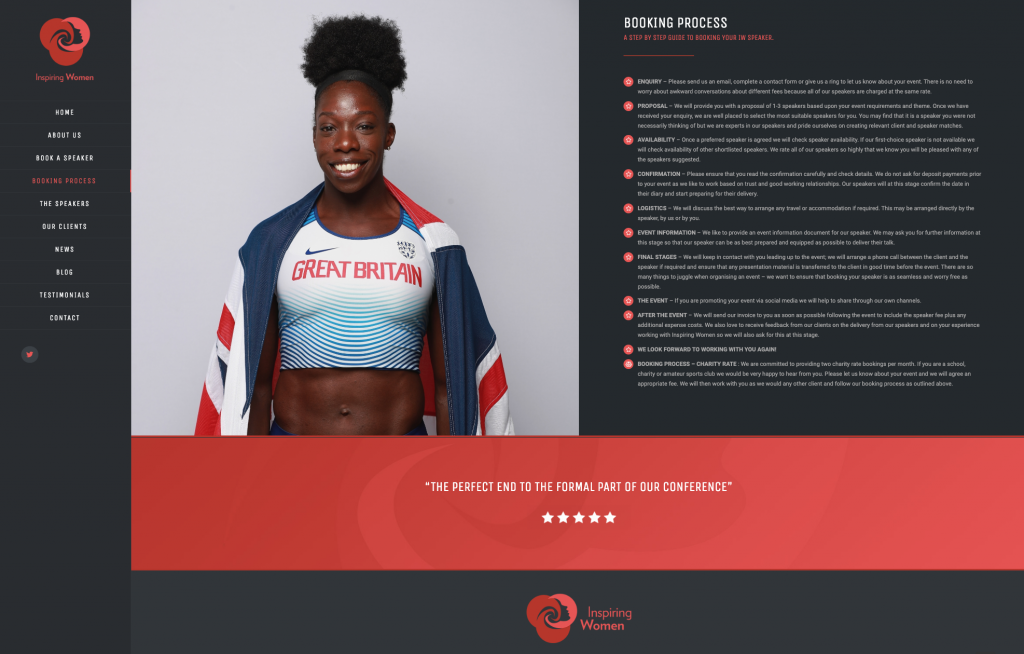 The final sweep added the layered background to the various Testimonials around the site. This gave me another chance to impress the palette – and a fade of the logo – into the overall design. I think it rounded off the design nicely.

TELL ME MORE ABOUT YOUR PROJECT

Whether you need a new website building from scratch or you want your current website assessed, with a view to upgrading it or moving it – drop me an email and I’ll do what I can to help. Also, If you are a photographer, illustrator or marketeer who is interested in forming partnerships, then please see my portfolio and get in touch for a chat.

Featherkite is a Boutique Web Consultancy based on the border of Devon and Somerset amongst the rolling hills. I work with an eclectic and far flung mix of fellow freelancers, all experts in their trade.